skip to main | skip to sidebar

LAGUNA BEACH, CA -- John Keitel's highly praised documentary "Saving the Boom." will have its Laguna Beach Premier this Thursday, July 16, 2009 at 7:00 pm. The film that has packed theaters in Los Angeles, Newport Beach, Palm Springs, Long Beach and recently in Tel Aviv, Israel will finally be shown in the town where the story is set. The screening is sponsored by the Laguna Beach Film Society, which has monthly showings of important films on the third Thursday of each month.

"Saving the Boom" is part of a local filmmaker's night, and will be feted at a pre-premier reception in the Community Room of Wells Fargo Bank, 260 Ocean Avenue from 6:00 to 7:00 pm. Then we'll walk the block to the Laguna South Coast Cinemas, 162 South Coast Highway for the 7:00 pm premier. Then everyone will head around the corner to the famous Marine Room Tavern,
214 Ocean Avenue for a short Q & A and drinks! We are trying to SAVE a bar after all.

Ads ran yesterday (see below) -- sponsored by SAVE the BOOM!!! -- inviting everyone in Laguna Beach to come see this wonderful story of the herculean all volunteer effort to save the historic Coast Inn and Boom Boom Room and Laguna's gay and lesbian life along with it. The film features over 40 Laguna residents, spanning at least three generations. It's funny, emotional, fast paced and sexy.

John Keitel has directed, produced and edited many award winning documentaries and will be present for all the festivities. 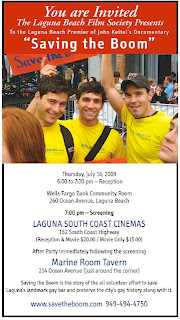 And check out the wonderful story about the Premier and SAVE the BOOM!!! by Daniella Walsh in this week's Laguna Beach Independent: CLICK HERE

The Boom Lives On, at Least in Film
Saving the Boom is more than mere nostalgia.
By Daniella Walsh
The only thing that now decorates the once fabled Boom-Boom Room is a For Sale sign. But, even though shuttered, it lives on in the minds of countless gay and straight revelers who partied there as a gay community symbol, something akin to the Stone Wall Inn, only in a happier context. Here, people pretty much danced and drank the night away without having to worry about the law, those who enforce it and gay bashers who persist in perverting it.
"The Boom was a wonderful place," recalled Laguna Beach resident Fred Karger, "It was the closest thing we had to a gay community center. It's now empty, and we want it back," said Karger, who optimistically still labors to re-open one of Laguna's main attractions for the gay tourist trade, which had fallen off but is, with the opening of new gayfriendly restaurants, on the rebound.
On Thursday, the Laguna Film Society will show "Saving the Boom," a John Keitel documentary chronicling the efforts of Karger and others who still endeavor to revive what was for many a home away from home.
The film premiered at the Los Angeles Outfest, played to packed houses at the Newport Beach Film Festival and the Long Beach Q Film Festival, and ran at the Tel Aviv Gay and Lesbian Film Festival in Israel last month. "I flew out to that and even did a major interview for a major radio station," said Karger, whose efforts to save the Boom from closure pushed him further out.
Before that, although openly gay, Karger he supported gay causes behind the scenes but never publicly.
"This was a great breakthrough for me, at age 59," he said. Former Laguna Beach mayor Bob Gentry, the nation's first openly gay elected official, was a cherished mentor and role model. Gentry co-chaired the Save the Boom campaign and is featured prominently in the movie.
Having stepped into public limelight anyway, Karger then charged into campaigning against passage of Prop. 8 and now for its repeal. "I did everything to make proponents of Prop.8 think twice," he said, including exposing the son of the Boom and adjoining Coast Inn owner Steven Udvar-Hazy as a $1000 contributor to Prop. 8 proponents.
The Boom closed in 2007 after an 18-month wrangle to keep it open. Since then, the price for the building package has fluctuated and so have its owner's fortunes. He reportedly dropped from being the 79th wealthiest person in 2007, to 288th now, in part because a sizable chunk of his wealth was in stock of now government-owned AIG. Shares that peaked in the $70s has sunk to under $2 per share.
Karger still harbors hope Hazy will unload the compound for a good price. "Hazy paid too much but perhaps it would help all of us if he sold it to us for a good price or if he were to donate the buildings to the city," Karger said. "We could put up a special trust and he could make a lot of points by helping us," he added. "I hope he'll do the right thing."
John Keitel's documentary: Saving the Boom Boom will play on Thursday, July 16 at the South Coast Cinema, 162 Pacific Coast Highway. Tickets at the door: $15 Free for Laguna Film Society members. Call: 949- 494-8971x201
Posted by Blog Master at 1:34 PM